Sciatica Pain: Let’s Get To The Root Of The Issue


Sciatica Has Many Causes

“Sciatica” describes a specific set of symptoms that generally include moderate or intense pain radiating through the lower back or down the legs -- something you probably already know firsthand. The pain is caused by something compressing or irritating the spinal cord or the sciatic nerve, from which the condition takes its name.

Complaints sometimes include pain when seated, constant pain in the buttocks, muscle weakness, shooting pains down the leg and tenderness on the inside of the foot. There may also be tenderness in the lower back, or numbness and tingling in the foot and toes.

So What Causes This Pain? 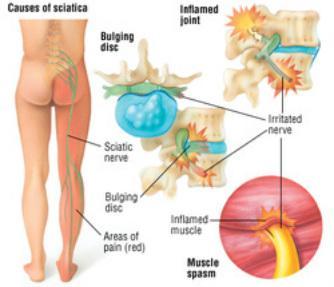 To understand how it works, think about the area of the lower back and the pelvis. The spinal cord ends at the middle of the back and branches into nerves that reach throughout the lower body. The sciatic nerve comes off of the lower part of the spinal cord and continues down the leg and terminates at the toes.

There are several points along its journey where the sciatic nerve can become impinged (pinched). Some of these include:

The body is usually adept at triggering protective responses to threats from injury or disease. However, sciatica is one situation where the body’s natural defenses may actually prove counterproductive.

When Your Friend Is Your Enemy
For example, one common response to pain is for the muscles  to contract and go into spasm. This is a protective response -- trying to defend the injured area by making the muscles around it stronger, and restricting excess blood flow. For sciatica sufferers, though, this response can actually increase the pressure on the nerve, making things worse. Additional pain leads to further muscular contraction, and so on.

In the worst case, this cycle can lead to painful muscle spasms, in which the muscle fibers contract and relax in rapid succession.

The body can also respond to pain with inflammation; by a cascade of physiological changes, blood is rushed to the affected area to accelerate healing. In this case however, the inflammation simply causes more pressure on the already-tender nerve.

While the symptoms may feel similar for pain caused by any of these root causes, the specific cause is important to know since it will determine the treatment suggested by a doctor.

Office Hours
Get in touch